Electromobility is on the rise. Public demand is growing, many countries are adopting effective legislation, and governments all over the world are granting subsidies. Manufacturers and service providers are increasingly embracing this trend, speeding up the industry-wide shift to the adoption of electric vehicles (EV). Often coupled with the topic of climate change, e-mobility now regularly makes headlines. Indeed, sometimes we are bombarded with too much information, and it is not easy to keep track of the latest and most important developments. In this article, we give an overview of where e-mobility is today, what the future may hold in store and how EVs can help companies profit from the flexibility of their energy systems.

Despite the economic downturn caused by the COVID-19 pandemic, 2020 witnessed a significant worldwide growth in the number of plug-in vehicles. According to estimates from the electric vehicle world sales database EV-Volumes, the combined global sales of plug-in hybrid electric vehicles (PHEV) and battery electric vehicles exceeded 3.2 million - compared to 2.26 million in 2019 - and now make up 4.2% of global light vehicle sales. This increase is all the more remarkable considering that auto markets in general suffered major volume losses during 2020.

EVs accounted for at least 10% of new light vehicle sales in 13 countries, with Norway outshining the competition with an astounding 75% share of plug-in electric vehicles. Iceland and Sweden followed with 45% and 32.2%, respectively. Overall, Nordic countries left the rest in the dust, but Europe generally did well. In fact, no other continent is represented in the top 15. In China, the largest market in the world for electric vehicles in terms of unit sales, that share was 6.2% while the US finished even further behind with only 2.3%. Due to its rather underwhelming performance last year, the US has now slipped to third place, overtaken by Germany, which recorded a staggering 263% increase in sales. Overall, the numbers are looking good, but they do not tell the whole story.

Realizing that the battery charge is low and that there is no source of electricity nearby is every EV driver’s nightmare. Unsurprisingly, range anxiety is one of the major concerns consumers have regarding electric vehicles. The industry can address this issue by building and strengthening charging infrastructure, and recent developments give us grounds for optimism.

In Europe, Germany is expected to continue being a key growth avenue for charging infrastructure, but the Dutch market is also set to foster the deployment of charging stations and expand considerably in the next few years. Elsewhere on the continent, the Italian toll road operator Autostrade per l’Italia is planning to adopt high-power charging stalls at all of its gas stations. Major manufacturers such as Daimler and Renault, as well as some leading organizations in the sector, notably Royal Dutch Shell and Siemens, have also been stepping up their efforts to invest in the development of charging infrastructure.

Precedence Research, a leading provider of strategic market insights, estimates that the market for EV charging stations will be worth over $39 billion by 2027 and witness a compound annual growth rate of 40.7% from 2020 to 2027. IDTechEx, an expert on emerging technologies, has been looking even further ahead. In a recently published report it projects that the global charging infrastructure market for EVs will have a value of more than $65 billion by 2031.

The following graph shows the growth trend in the number of charging stations: 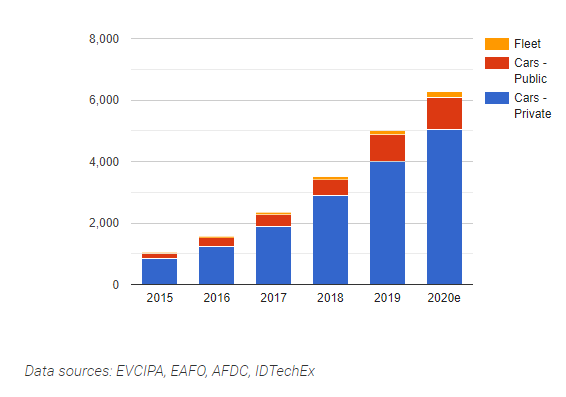 Smart charging takes place when an EV shares a data connection with the charging device, which in turn is connected to, and thus shares data with, a centralized management system. Charging stations can be managed based on the level of energy production, local electricity consumption or the number of vehicles being charged nearby. In other words, the operator can manage how much energy to give to an EV that is plugged in and charging. This amount may vary depending on how many people are using electricity at that particular time, i.e., how much pressure is on the grid.

Smart charging prevents operators from exceeding their maximum capacity, as defined by grid capacities and energy tariffs. Additionally, utility companies can determine certain limits for consumption, as well as the time and the speed of charging so as not to overload the grid. The driver can define the time by which they need to have a full charge, and the charging operator guarantees that the amount of electricity required will be delivered. This flexibility saves time and money, and optimizes the use of resources.

As to energy companies and public utilities, smart charging offers them the benefit of being able to flatten demand peaks by shifting loads to off-peak times, which reduces the strain on the grid and stops them from having to ramp up gas or coal plants to meet the demand.

In short, smart charging benefits drivers, utilities, the electricity system and, thanks to the increased use of clean, renewable energy, the environment as well. With the required technology already available, the challenge is to expand the infrastructure to ensure that more and more smart charging stations can be in operation. Once again, the signs are encouraging.

In the Netherlands, about 80 public charging stations owned by municipalities were equipped with innovative software in June 2020. Vattenfall Netherlands, alongside Liander and ElaadNL, has run a pilot project in Amsterdam (FlexPower Amsterdam) and has also collaborated on a project with Berlin Waste Management on flexible charging. In October 2020, the German energy giant E.ON acquired innogy eMobility, a technology provider of software and hardware, and its focus has now shifted to smart charging: the company’s backend operates over 12,000 smart charging points with a reliability rate of more than 99.8%. That seems as close to perfection as you could get, and yet we are not stopping there.

Over the years, growing environmental concerns and the demand for a more dynamic and cleaner grid have led to the development of different energy storage solutions. Pumped storage hydropower currently represents almost all storage capacity, but stationary battery storage projects are on the rise; for the latter the International Energy Agency (IEA) predicts a capacity of 100 GW by 2030. Vehicle-to-grid (V2G) technology is a form of power storage which offers the same advantage as pumped storage - i.e., the flexibility provided by storage capacity - and has the potential to overtake it. According to a report published by IEA in June 2020, V2G is predicted to provide over 600 GW of flexible capacity globally by 2030. By contrast, the International Hydropower Association foresees a pumped hydropower storage capacity of 240 GW for the same time period.

V2G goes one step further than smart charging: it allows an EV car battery to charge and discharge based on different signals. So, in addition to the charging power being increased and decreased, which is what happens during unidirectional smart charging, that power can also be pushed back to the grid and thus balance variations in energy production and consumption. Crucially, grid balancing continues for the entire period that the vehicle is plugged in, as opposed to regular smart charging where this balancing ends as soon as the battery is fully charged. Even when you are not on the go and your EV just stands around - which is most of the time - your car can function as storage on wheels, thanks to the two-way flow of energy. In the greater scheme of things, V2G helps mitigate climate change since having a bigger capacity of flexibility on the consumer side enables us to increasingly rely on renewable energy.

Despite all its advantages, V2G is not taking the world of electromobility by storm just yet. Bidirectional charging takes place via the DC port, and cars need to be compatible with the CHAdeMo DC connector. At present, only a couple of Nissan models are, so the majority of EVs on the roads do not have a V2G-capable charging system. However, Mitsubishi has announced plans to make its Outlander PHEV compatible, and other manufacturers are expected to follow suit. While the technology still matures, pilot projects are run in order to test its viability.

Munich-based company The Mobility House first carried out tests to create a connection between the vehicle and the grid in 2014. Four years later, a Nissan LEAF met all the regulatory requirements of the transmission system operator and was prequalified for the German market. More recently, the company has been involved in a joint project with Groupe Renault that aims to make all forms of transportation on the island of Porto Santo in Portugal fossil-free. The Mobility House’s contribution is the development of the software “Marketplace,” which optimizes the interaction between regular EVs, second-life battery storage and bidirectional EVs.

Another success story is that of Enel X, a leading provider of smart EV charging stations. Based on its cloud-connected platform JuiceNet, the company’s North American subsidiary eMotorWerks provided a 30MW “virtual battery” to the grid in California in 2018. The combination of charging stations and the JuiceNet software allows utilities to analyze and model what role chargers can play in both retail and wholesale markets. Enel X projects that, by 2025, it could supply the amount of energy equivalent to 47 natural gas power plants. Also in the US, Fermata Energy specializes in pioneering technology that integrates EVs with the electricity grid. Meanwhile, back in Europe, ABB has partnered with the French venture DREEV and plans to introduce its bidirectional charging technology, specially designed for V2G, which will be fully compatible with both current and future vehicles. The release date is as yet unknown. Such uncertainties, however, are only temporary delays - the energy revolution continues to move forward and it‘s likely to increase its pace.

The field of e-mobility offers great opportunities: for the environment and also for charging station operators. If you want to learn more about how to profit from EV flexibility, contact us and let our experts in AI-based energy trading put you on the road to success.

E-mobility: If Norway can do it, you can too. Or can you?

The power of the atom